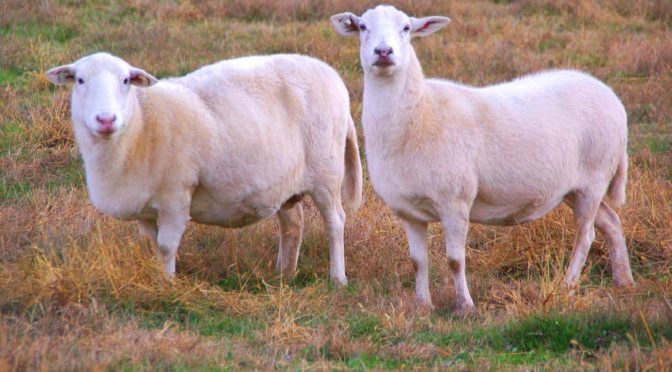 Katahdin sheep are a breed of hair sheep developed in the United States.  The Katahdin breed originated at the Piel Farm in north central Maine where Michael Piel was an innovator and amateur geneticist who enjoyed raising livestock.  His initial intentions related to establishing a sheep enterprise were to use sheep to graze power lines rather than spraying or mowing the vegetation.  He then developed alternative concepts on how to use sheep for land management. 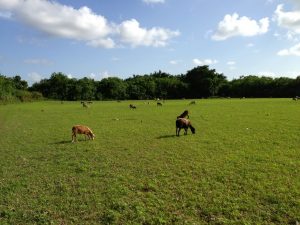 In 1956 and 1957, Piel began making inquiries concerning hair sheep once seeing photos during a National Geographic magazine of West African hair sheep.  He eventually created contact with Richard Bond of the U.S. Agricultural Research Service in St. Croix, Virgin Islands who was working with hair sheep flocks on the island.

Three “African Hair Sheep,” as they were known as then, were imported to Maine from St. Croix on November 21, 1957, All were but a year of age, born triplets, unrelated for several generations, and wool less with wool less siblings.  One female was tan in color, the male and another feminine were white.  The price was $10 and $75 shipping for each lamb

The ram lamb, “King Tut,” was used for breeding a few ewes in December 1957, including Tunis, South down, Hampshire, Suffolk, and also the “African” ewe lambs. -From this point on, crosses of many breed combos (including Cheviots and alternative “Down” breeds), were made as Piel tried to see what would produce the kind of ewe he was looking for.  He was significantly selecting for hair coat, meat-kind conformation, high fertility, and flocking instinct.

In the early 1970s, Piel felt he had return close to his goal of a “meat sheep that didn’t require shearing.” He selected from his giant flock approximately 120 of the simplest ewes and called them “Katahdin” sheep when Mt. Katahdin, the best peak within the state of Maine.

In October 1975, Piel imported a few Wiltshire Horn sheep from Wales via Canada.  He supposed to enhance size and bone by incorporating the Wiltshire into the Katahdins.  The primary crosses were born in 1976.

Paul and Margaret Jepson of Vermont had become accustomed to Piel while attempting to locate Wiltshire Horn stock and set the newly developed Katahdins would suit them better.  They purchased some sheep from Piel within the mid-Nineteen Seventies and established the first satellite flock of Katahdins.  The Jepsons then experimented with incorporating St. Croix blood (another hair sheep breed resembling the first “African Hair” type) into their flock in the first Nineteen Eighties.

Heifer Project International, a global livestock development charity, took an interest in Piel’s work and his “improved” hair sheep. HPI realized that Katahdins were similar temperament to the southern U.S. and built a sizeable flock at their center in Arkansas through the Eighties based mostly on stock from Piel Farm and Jepsons.

Michael Piel died suddenly of a heart attack in December of 1976.  The Wiltshire Horn influence in the Piel Farm flock increased within the late Nineteen Seventies as scale and bone improved somewhat.  However, the undesirable presence of horns, decreased prolifically and flocking instinct, and a flightier disposition resulted from incorporating the Wiltshire Horn.  During the early Eighties, under the leadership of Barbara Piel and farm manager Charles Brown, flock choice was against horns.

Katahdin Hair Sheep International was incorporated in 1985 as a breeders’ association and registry by Piel Farm, Heifer Project, and Donald Williams.  The first inspection of animals for the original registry flock book was conducted in 1986.  Stan Musgrave, an animal scientist from Maine acquainted with the Piel flock, inspected all Katahdins known to exist across the United States.  The first KHSI members were accepted in 1987, and 23 breeders agreed to affix KHSI and register their Katahdin stock. 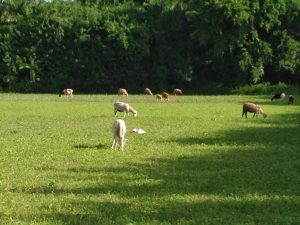 Katahdin are hardy, adaptable, low maintenance sheep that manufacture superior lamb crops and lean, meaty carcasses.  They do not produce a fleece and therefore don’t need shearing.  They are medium-sized and efficient, bred for utility and for production during a selection of management systems.  Ewes have exceptional mothering ability and lamb simply; lambs are born vigorous and alert.  The breed is ideal for pasture lambing and grass/foragebased management systems.

They have demonstrated wide adaptability.  They were derived from breeds that originated in the Caribbean and British Islands and therefore the state of Maine was their original home.  In cold weather, they grow a very thick winter coat, that then sheds throughout warm seasons.  Their smooth hair coat and alternative adaptive characteristics permit them to tolerate heat and humidity well.  Katahdins also are significantly tolerant of internal and external parasites and if managed rigorously require only minimal parasite treatment.

Katahdins are docile so are easily handled.  They exhibit moderate flocking instinct.

Live weight of a mature ewe in smart condition usually ranges from 120 to a hundred and sixty pounds; a mature ram can weigh one hundred eighty to 250 pounds.  Average birth weight of twins is concerning 8 pounds.

Ewes and rams exhibit early puberty and generally have a long productive life.  Mature ewes sometimes have twins, often producing triplets or quadruplets.  A well-managed and selected flock should manufacture a 200% lamb crop.  Rams are aggressive breeders, generally fertile year spherical, and will settle a giant variety of ewes in the first cycle of exposure.  With choice a flock will consistently lamb all year long. The Katahdin ewe shows a sturdy, protecting mothering instinct, typically lambs without assistance, and has ample milk for her lambs.

Lambs turn out a prime quality, well-muscled carcass that’s naturally lean and consistently offers a terribly mild flavor.  Lambs are appreciate different medium-sized maternal breeds in growth and cut ability.  Lambs are fascinating for specialty markets at a selection of ages and weights, weathers are appropriate for standard North American markets at 95 to one hundred fifteen pounds.

The hair coat of the Katahdin varies in length and texture among individuals and can be any color or color combination.  It generally consists of coarse outer hair fibers and an undercoat of fine wooly fibers that becomes very thick and longer if cold weather sets in and day length decreases.  This undercoat and a few hair naturally sheds as temperature and day length increase seasonally, leaving a shorter, smooth summer coat.

The Katahdin will be utilized in crossbreeding programs.  When crossed with wool sheep, the primary generation offspring will in most cases have wool fleeces with hair intersperse.  It sometimes takes a minimum of three generations, relying on the sort of wool sheep parentage, to obtain offspring with a shedding hair coat and different purebred characteristics.