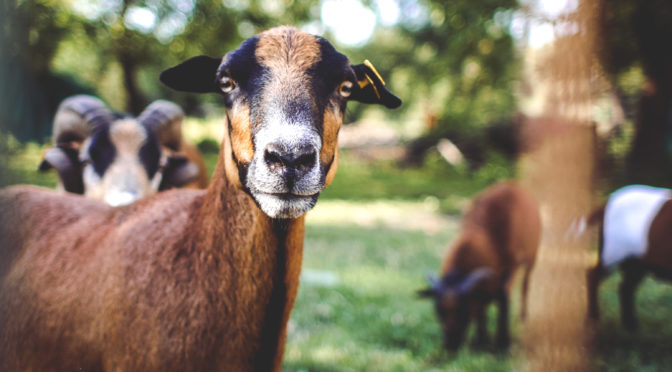 Goats and Sheep are a very common beginner animal when one is looking to get into raising livestock for the homestead. Wether you are raising livestock for meat, milk or wool/fiber, both goats and sheep have something to offer. Many people will begin their livestock venture with either a few goats or a few sheep but further down the line, they decide they would like to add goats to their farm if they only have sheep or vice-versa.

For many, it is unclear whether those two species can be raised together, sharing the same shelter, same pasture, same feed, etc. Well the good news is, it is very easy to keep these species together just as long as a few precautions are followed.

There are two options here:

1. Both species are fed a general feed that is without copper. This can be an All-Stock Feed, a Sweet Horse Feed, many feed stores even offer a Sheep & Goat feed. The latter type of feed would be best. A general all species mineral can also be fed along side these types of feed. The only type of feed/mineral that can not be fed to both species is a Goat Specific Feed or Cattle Specific feed because these both have added copper that is not good for the sheep. If you go this route, many times the goats will not be receiving the proper amount of copper in their diet. This requires that the goats be supplemented with copper. A copper bolus is the most common and effective way of supplementing goats with copper.

2. The second option is keeping both species together but buying species-specific feed and mineral and feeding them separately at feeding time. This can work depending on your setup but if goats and sheep are fed in the same area, there is a good chance they will end up in each other’s feed so option one is really the best option.

All other aspects of feeding and raising goats are very similar. They both require a good quality hay. An orchard grass mix is best for both species. An alfalfa mix could be supplemented during lactation but it is not recommended to give alfalfa to sheep and goats that are pregnant as it could cause the kids/lambs to grow too fast inside the mom and cause labor problems.

Now that you understand their nutritional needs, here are a few other things to know about keeping goats and sheep together:

Their shelter requirements are the same. Both species require a 3 sided shelter at the very least. Goats dislike rain and just generally getting wet, much more than sheep do so keep this in mind when providing shelter. It should be adequate enough that both species can stay dry no matter what the season or the weather.

Goats and Hair sheep don’t require much in the way of grooming. Angora Goats and Wool Sheep require quite a bit more when it comes to grooming. Both of those woolier breeds will need to be sheared during the spring and sometimes the fall as well. When it comes to hoof-trimming, goats will require more frequent trimming than sheep. Goat hooves are also a bit softer than sheep hooves so be aware of this when trimming. It can take some adjusting when moving from one species to the next.

Goats are browsers and they prefer to eat bushes, tall weeds and low hanging tree branches before they will turn their attention to grass and short weeds. Sheep are grazers who prefer grass, forbs, or short weeds to bushes but they will definitely investigate low bushes and low hanging tree branches. They are just less inclined to spend as much of their time doing that as goats will.

When it comes to breeding, goats and sheep have about a 5 month gestation and depending on the breed of goat or sheep, they will either breed year round or seasonally. Sheep and Goats that breed seasonally, generally come into heat during the fall in order to lamb or kid in the spring. Knowing this, it would be easy to keep a mixed group of does and ewes and breed them all at the same time if you have access to a ram and buck.

When breeding, it is not recommended to throw both a ram and buck into a mixed flock of ewes and as this could cause a lot of stress and confusion in the herd. When it comes time to breed, animals should be split into species specific herds with the right male thrown in or does and ewes should be taken to the buck or ram for a visit. It is also not recommended to keep bucks and rams together when they are not being used for a breeding. A ram can seriously injure a buck, especially during rut. Rams tend to be stronger than bucks with stronger skulls and they have been known to kill bucks with just one head-butt. Bucks also like to rear up when head-butting, whereas rams like to ram in a straight line. This usually ends up with the buck received a serious blow to their abdomen which can be fatal. So it is important to keep the males of these species separate.

The last thing I would like to mention is that both goats and sheep are very social animals. Some people sometimes just want to start out with one animal just to get their feet wet. You cannot keep a lone goat or sheep, it will be a very happy and loud animal not matter how much attention you can give it. You must keep at least two. Similarly, it is not recommended to have only one of each species kept together. Two goats and two Sheep of the same sex, are the minimum one should have when keeping these species together. While sheep can bond to goats and vice versa, they will create a MUCH stronger bond with their own species because that is who they are most comfortable with. As someone with a mixed herd, I can tell you that in a more confined space, sheep and goats will mingle pretty regularly but no matter how long they have been together, when let out into the open, they will find the ones that look most like them and stick with them. It’s what is natural to them. So if you are thinking of adding either one species or the other to your herd, make sure whatever you are adding, has a companion of the same species to bond with or they will be very unhappy in the long run.

If one keeps all of these factors in mind and uses a bit of common sense for anything not covered here, then one can be very successful in raising sheep and goats together.